In honour of a BoatsAfloat founder and legendary local boatie, the Most Desirable Boat Award and perpetual trophy was named The Malcolm McKay Perpetual Trophy Best Boat Award, and judged by a panel of participants over the weekend, with the winner being Terry and Jan Lance for their steam launch ‘Leslie H Lance ‘.

Friday night around 100 people gathered for a bbq and briefing and raffle prizes, and delicious burgers cooked on the kindly donated Marine Rescue bbq trailer.

Returning to Forsters Bay local band Jazz Alley entertained at the Narooma Maria, Montague Arts and Crafts held a marine-themed exhibition in a boat shed, and the public came in droves to have a good stickybeak at the boats.

Saturday night’s dinner went down well with a spit roast, veges and salads provided by the CWA ladies, and a delicious cake made by Zoe from Central Tilba. The auction raised around $1000 to be used for next year’s festival.

Sunday morning and the Grand Parade was followed by a moving Armistice Day ceremony on Wagonga Inlet, with Peter Flynn piping Amazing Grace and a wreath laying on the water.

The traditional closing lunch and speeches back at Narooma Marina wrapped up a great weekend. For pics visit our Gallery page.

60 traditional boats of all shapes and sizes from NSW, ACT and Victoria ensured the 2017 Narooma Boats Afloat Festival would be a big success.

Friday night’s welcome bbq was well attended with over 100 people not letting the drizzle get in the way of a good time.

Saturday’s morning tea cruise had to be changed to just circling Forsters Bay due to the predicted weather, but the sun emerged to allow for a great afternoon of jazz and boat viewing at the Narooma Marina, as well as Montague Arts and Craft’s fourth art exhibition, eventually won by noted Narooma artist Margaret Moran.

The dinner went well as did the auction.

Sunday’s Grand Parade down the channel to the Boardwalk was a beauty with rowers rowing, steamboats whistling and putt-putts putting for the enjoyment of an enthusiastic crowd along the shores and on the bridge.

The closing lunch was a winner and many skippers flagging they will be back again next year.

Most desirable boat this year was won by Dick Bedell of Batemans Bay and the boat he built and named “Flinders”.

Thank you one and all for coming and making our 12th Festival a success.

See the Gallery Page for 2017 pics

53 boats registered and the rain and wind only made things more interesting, though we could do without them!

Friday bbq – big downpour just before it started but then a great sunset – well over 120 people made the most of the great atmosphere to open the Festival!

Saturday picnic cruise at our alternative landing site on Bob Wyldman’s “Blackwood Park” beach near Pete’s Point went well with 40 boats pulled up on the shingle or anchored off.

Saturday Afternoon Jazz and marina gathering – We’ve never seen a venue empty so fast! All the public and the boats were arriving and then the big black cloud opened up and the rain poured – but the band played on!

Sunday Grand Parade – windy but 38 boats made the trip and then a huge crowd at the bbq and farewell.

Please visit our Thank You page to see the list of those who have sponsored us and helped us out.

Thanks to all and see you next year!

55 officially registered vessels from tiny sailboats and kayaks right up to 10m+ serious boats, and every sort of propulsion from sail and paddles, petrol Blaxland, Simplex and Stuart Turners to diesels and 3 (yes three) steam powered boats!

Boats came from as far as Latrobe Valley in Victoria and Smiths Lake in NSW and from all along the coast in between, as well as inland from the ACT and southern highlands.

And didn’t Wagonga Inlet turn on the charm.. great weather, blue blue water and the crowds visiting Forsters Bay on Saturday then lining the shores, the bridge and the Mill Bay Boardwalk for the Grand Parade on Sunday!

Then there was the social side of things for the boaties…. the Friday BBQ; the Saturday morning tea picnic at Paradise Point; the Saturday evening dinner at “The Inlet” with delicious and copious food, and a great auction with the proceeds going to the Narooma Men’s Shed; and finally the Festival Farewell BBQ with a delicious Garry Ebbeling lunch.

The new-management at the Narooma Marina allowed 29 boats to be tied up for the appreciative public to come and see on Saturday afternoon. We had two sheds full of MACs art to check out and all topped off by 2 hours of jazz from “Jazzpack” – all for free! Fantastic!

The full thank you list is coming soon, but to all the boaties who travelled, and to all the local boats, to all the public who shared the weekend with us and to anyone involved it’s a big THANK YOU from us at Narooma BoatsAfloat.

The Art in the Boatsheds Prize was split this year – half going for a photograph by Chris Perrott – “Still Water” and the other to a painting by Rona Walker “Reflections”.

Please visit our Thank You page to see the list of those who have sponsored us and helped us out.

Held on the weekend of 1-2-3 November, this year’s event was very well received – the only downer being the strong southerly wind on Sunday which caused the cancellation of the Grand Parade.

Friday’s bbq was well attended by 100 or more people, as was Saturday’s picnic at Paradise Point.

Saturday also featured an art exhibition in association with Montague Arts & Crafts Society which was very well received by all.

“The Jazz Pack” supplied the music for Jazz on the Water and a new “Buy,Sell or Swap” session was well attended and many items changed hands.

Saturday’s fund-raising dinner and auction was a wonderful evening of fun and food and raised funds to help the committee continue with the festival.

Sunday’s wind blew away the Grand Parade, but the farewell bbq was a great event, with Eric Simes’ self-crafted boat “Legend” being named Best Boat for 2013 by the panel of 5 judges.

The inaugural Art in the Boatsheds award went to Narooma artist Margaret Moran’s watercolour “Waiting for the Men”, which also happened to feature one of our regular festival attendee boats “Melkirdan”.

Excellent coverage from Stan Gorton of the Narooma News is HERE!!

Memories from the beginning…

We began with just a few boats in 2006. Like-minded people sharing our love for traditional boats.

2007 saw this grow into a flotilla of 27 boats coming from Toronto on Lake Macquarie, Central Coast and Canberra, joined with our local and South Coast devotees for a weekend of fun in the sun, showin’ off nautical expertees or lack of, gawkin’ at some of the prettiest clinkers and carvels you’ll ever see, the telling of tall tales and true of adventures and misadventures on the high seas,(fuelled by the firewater at Pelican’s Restaurant) and generally just messin’ about in boats. 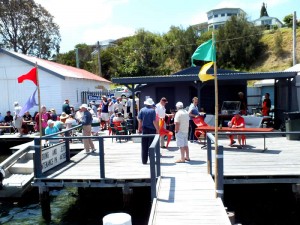 Over the next years the festival has grown to see up to 50 boats entered.

Our good friends at Narooma Marina (back then it was also Pelican’s Restaurant), Robin and Heather, gave us full use of the marina for the weekend, so our out of town guests could berth their boats right where the action is and not worry about trailering for the whole weekend.

And action there was – Friday kicks off with a bar-b-q at Mal and Carmel’s where over 60 folk gathered for top tucker and an ale and a peek at mad Mal’s marine motor museum, where Blaxland, Simplex, Hardman, Clay, Stuart Turner, Vinco and others, were urged to chug and cough their way into our nostalgic hearts and fill the under house shed with enough 2 stroke and 4 stroke fumes to euthanase the lot of us.

Saturday morning saw the start of the inaugural Pelican’s Challenge – the brainchild of Paul and Liz, it involved cruising around the Inlet answering questions and riddles on landmarks that had to be found. Morning tea and damper was served up by Jeremy and Heather at the aptly named Paradise Point.

Round 2 of the challenge concluded with lunch back at the marina and then the comical “Backwards Race”, whereby contestants rowed, paddled, motored, sailed and steamed their vessels in reverse around a buoy and back to the finish line. The lack of steerage in reverse was a minor impediment to the eager participants. 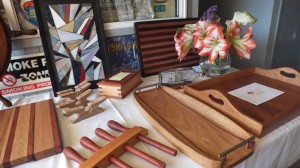 That night we dined at Pelican’s Restaurant overlooking the marina and our boats all snugged up at their berths. The wine flowed, the beer bubbled, the seafood sumptuous and the tall stories got taller.

Sunday morning got underway albeit haphazardly, with some hesitant starts, one or two complete fail to starts and some breakdowns resulting in towropes from the “oh so reliable” diesels.

A procession out the bay, under the Narooma bridge, along past the boardwalk, down the channel to pretty little Bar Beach and a peek at the open ocean. The return trip saw an impromptu stop at the low tide sand bar for a swim.Lunch at Brian and Elizabeth’s boat shed spilled over into Col and Carol’s boatshed and for those that still hadn’t satiated their senses with exhaust fumes from their petrol pet or craved the tremulous vibrations from spinning flywheels, a trip to the shallow reaches at the top of the inlet was proposed.

We had a small sailing contingent of 3 vessels that graced our waters – a beautiful 20 foot owner built ketch, another classic owner built canoe yawl and the ever popular Hartly 16 TS (all local boats) – and we are keen to see more sailors so we can organize a regatta.

Every year we see old friends reunite and new ones made in a common bond – a passion for traditional craft. Each year we hope to see those friends back again and with others in tow as word spreads about our friendly festival.

The festival has now grown to have around 50 boats entering, (and quite a few ring-ins during the parade), and the dinner now features an incredible auction of items savaged, made and donated. Art exhibitions, a great raffle and Jazz on the Water make the whole weekend a fun time for all.

Photos of the first Festival Dinner

Photos – thanks to Carmel McKay 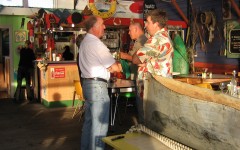 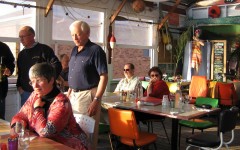 Guests enjoying the sunset at the Quarterdeck Narooma 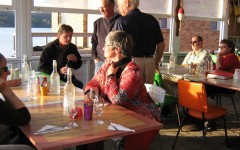 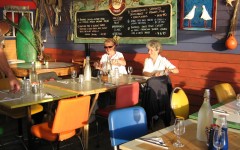