Details, entries and much more will come when the time is appropriate.

2019 – A gallery of pics is now HERE, and a review of the highly successful 2019 Festival is featured below!

Narooma BoatsAfloat Inc is a group of people with an interest in enjoying and celebrating Traditional Boats in all their varied forms – from clinkers and putt-putts to launches and cruisers and yachts.

In spring every year since 2006 a weekend festival is held on and around the pristine waters and colourful boatsheds of Wagonga Inlet in Narooma on the NSW south coast.

ENTRIES ARE ALWAYS FREE and the Festival is open to any traditional style boat – Putt Putts, Steam, Sail, Rowing and Kayaks.

Each year we provide a relaxed program of boating activities on the crystal clear waters of Wagonga Inlet in scenic Narooma on the NSW South Coast.

This website provides a record of some of the past festivals as well as information for the public and for boaties on any upcoming festival.

Narooma BoatsAfloat Festival dates are 6-8 November 2020. Put it in your diary. We’ve set the date and the count down has begun. Only 250 days to go! ... See MoreSee Less

Share on FacebookShare on TwitterShare on Linked InShare by Email

One for the calendar. ... See MoreSee Less

Share on FacebookShare on TwitterShare on Linked InShare by Email

By all accounts one of the best this year with 46 boats registered.

118 folk turned up for the BBQ which went off without a hitch, and as always the platters and hamburgers proved very popular with very little remaining at the end of the night.

92 pax cruised impressively to Paradise Point for the morning tea made up of freshly baked scones, tea/coffee and juice for the kids who this year displayed their entrepreneurial skills by delivering scones to those boaties who couldn’t get ashore.

Some would know that Paradise Point has been sold to Sydney interests and so the location of next years morning tea is a little uncertain, but on a positive note, the current owner (Heather Ferguson) was very pleased with the way in which the morning tea was organized and the fact that we left the property the way we found it (pristine) and accordingly, she is going to speak to the new owners about our event with a view of them allowing us to continue the tradition. 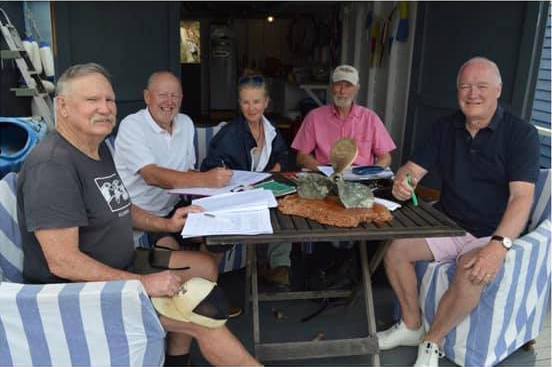 Morning tea was followed by a relaxed afternoon at the Marina being entertained by local band ‘Swings the Thing” also allowing participants and the public to get up close to the many boats involved.

The Saturday night function was well attended with the maximum 80 guests turning up to “The Inlet” for dinner and the nautical auction.

The long table arrangement allowed guests to mingle and enjoy the meals prepared by Andrew and his team before the auction, which this year saw keen bidding on a number of highly desirable items, the most popular being two deck chairs constructed by the Narooma Mens Shed under the watchful eye of our events manager Susanna Duveen.

Other items, such as the hand made rope mats, art work, and antique French marine binoculars also proved desirable.

Sunday morning started out quite cool with light showers in the area, however come 9.30 the showers had gone, the sun was out and 36 boats, including an eclectic mix of steam, electric and conventional powered boats, took to the water for the Grand Parade, providing quite the spectacle for the crowds who lined the bridge and board walk to take in the event.

We also took the opportunity to thank all participants and the many sponsors who support our festival and help make it the success that it is.